American Thanksgiving is in 12 days.

The stuffing recipe I make for my turkey brings back memories from my childhood Thanksgivings. It is from the McCall’s Cookbook that my dad executes every holiday that involves a turkey.

The McCall’s Cookbook is one of the more popular collectible cookbooks from the 60s. It is a thick, over 700-page cookbook in the same vein as Betty Crocker Cookbook. In general, it is loaded with recipes and how-tos. Most of the recipes are short and easy-to-follow. A Betty Crocker Cookbook definitely had an edge up in terms of cookbooks from the 60s era since McCall’s has no photos.

I’m still hoping that in the future to add my mom’s bright yellow copy to my cookbook collection. 😉

I presently use a beautiful bright pink printout of the stuffing recipe. One funny thing from the original recipe is that it calls for fine fresh-white breadcrumbs. Eeew! I can’t even imagine that. It would be the consistency of mashed potatoes with onion and celery pieces. My dad always used cubed bread. 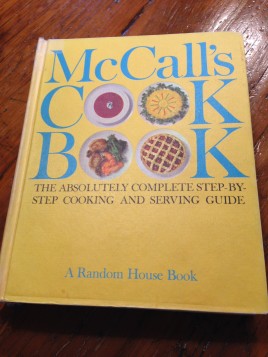 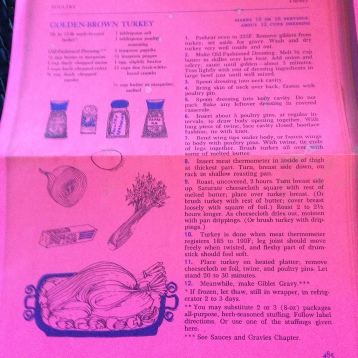 My pink printout of the Golden-Brown Turkey Recipe

My Best Stuffing for Thanksgiving Dinner

Adapted from the McCall’s Cookbook for Golden-Brown Turkey 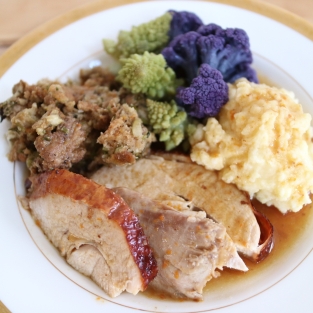 My Best Stuffing is a combination the bite-size pieces of the ingredients for texture and finely chopped in food processor. I chop half of each vegetable into ½ inch pieces with my knife and the other half  I will place into a food processor to be very finely chopped.

Remove the root ends from the onions and dice 1 onion and the other onion cut into quarters for the food processor.

Remove the inside stalks and leaves from the head of celery. Set aside for the stock and gravy.

Cut 1 of the head celery stalk into ½ inch pieces, set aside. The remaining stalks cut so they will fit in a food processor. 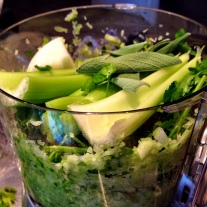 Remove the stems from the parsley and reserve for the stock and gravy.

Place the bite-size pieces of celery and onion into a large microwavable bowl with melted butter.

Pulse in the food processor until very finely chopped but not liquid.

Note: At this point, the celery/onion mixture can be covered, refrigerated and stored several days in advance. On the day that you are stuffing the turkey, remove from fridge and bring to room temperature and then mix with dried out cubed bread. 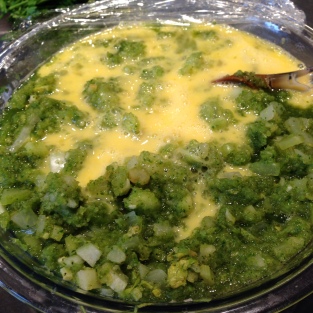 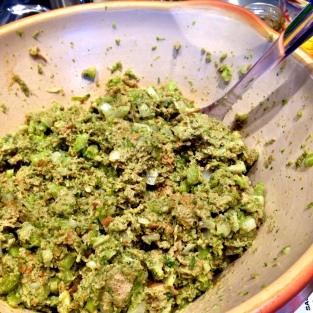 Stuffing Mixed and Ready for Turkey

Place the dried out cubed bread into a large mixing bowl.

Toss lightly the celery/onion mixture with the dried cubed bread.

Bend wings tips of the turkey under the body.

Spoon stuffing into the neck cavity of the turkey; fasten close with poultry pins.

Spoon stuffing into the body cavity of the bird. Do not pack.

With twine, tie ends of legs together and truss the turkey and using pins secure the stuffing in the cavity.

Stuffing the Body Cavity of Turkey 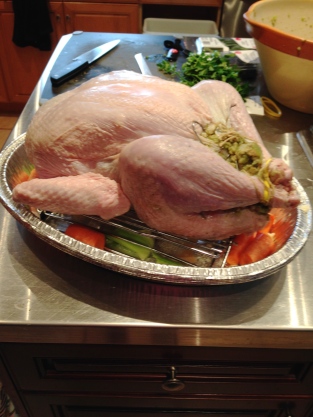 Never place a warm stuffing into the bird. Once the turkey is stuffed it should be placed in the oven immediately to begin roasting.

Bake any leftover dressing in a well-greased covered casserole. 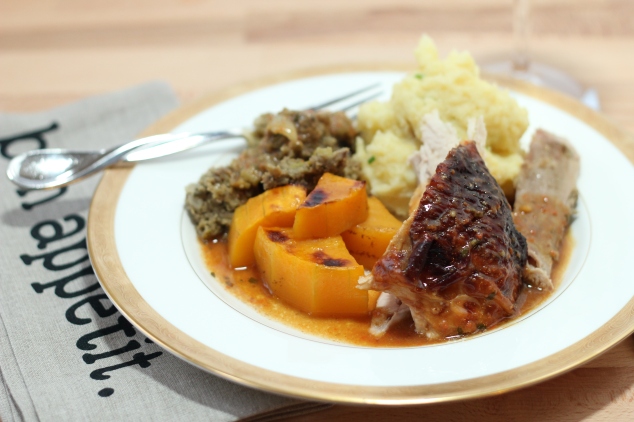 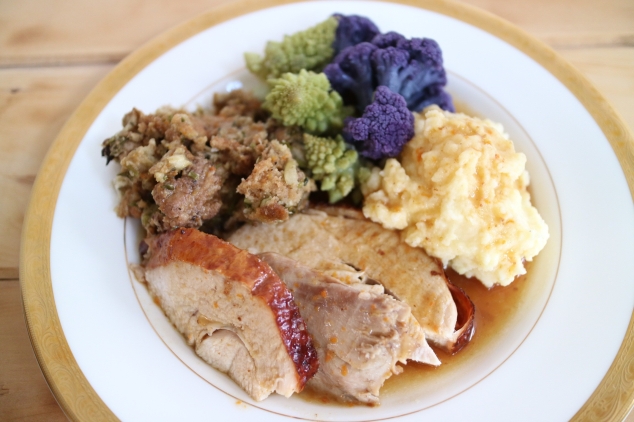 * My local grocery store makes their own stuffing bread which is a flavourful bread baked with thyme, sage, marjoram, rosemary, black pepper, and nutmeg. A day or two ahead of making the stuffing, cube the 2 loaves of stuffing bread and spread out evenly on baking sheets. Leave on the counter to dry out overnight or bake the cubes in a low oven until lightly crisp and toasted.

As I spent the weekend browsing through the food blogs and Instagram accounts that I follow, I came across the mention of Jamie Oliver’s infamous recipe for “Chicken in Milk” as the best chicken dish they had ever tasted.

When you look at the components of the recipe it is quite a peculiar combination. Lemons, cinnamon, sage and milk.

OK Lets do this….

Chicken in Milk served with mashed potatoes and sautéed spinach

Preheat the oven to 375 degrees F, and find a snug-fitting covered pot for the chicken. (I used my Oval French Oven | Le Creuset Canada )

Season the chicken very generously all over with salt and pepper, and fry it in the butter/olive oil, turning it to get an even colour all over, until golden.

The tasty goodness at the bottom of the pan can be used to lightly saute the onions.

Add the remaining ingredients and place your chicken back in the pot, and cook covered in the preheated oven for 1 hour.

Baste with the cooking juice when you remember. Cook under covered for the last 40 minutes of cooking.

The lemon zest will sort of split the milk, leaving little curds bathed in chicken juices, and not homogenized; this appearance is less appealing. Remove the cinnamon sticks, and used an immersion hand blender to make sauce infused with lemon and balanced with an aromatic flavour from the cinnamon and sage.

To serve, pull the meat off the bones and divide it on to your plates. Spoon over plenty of the lemony sauce over the chicken.

Serve with wilted spinach and some mashed potatoes. And a crusty baguette would be great to sop up the delicious sauce.

Tip: Make sure that you season the chicken very generously. Any extra time that you take to brown the chicken on ALL sides will embark more flavour in the end product. Try to achieve a deep golden colour on the skin.

The next time I make this I will also add the juice of 1 lemon for an added kick. 😉