Adapted from an Epicurious Recipe by Katherine Sacks 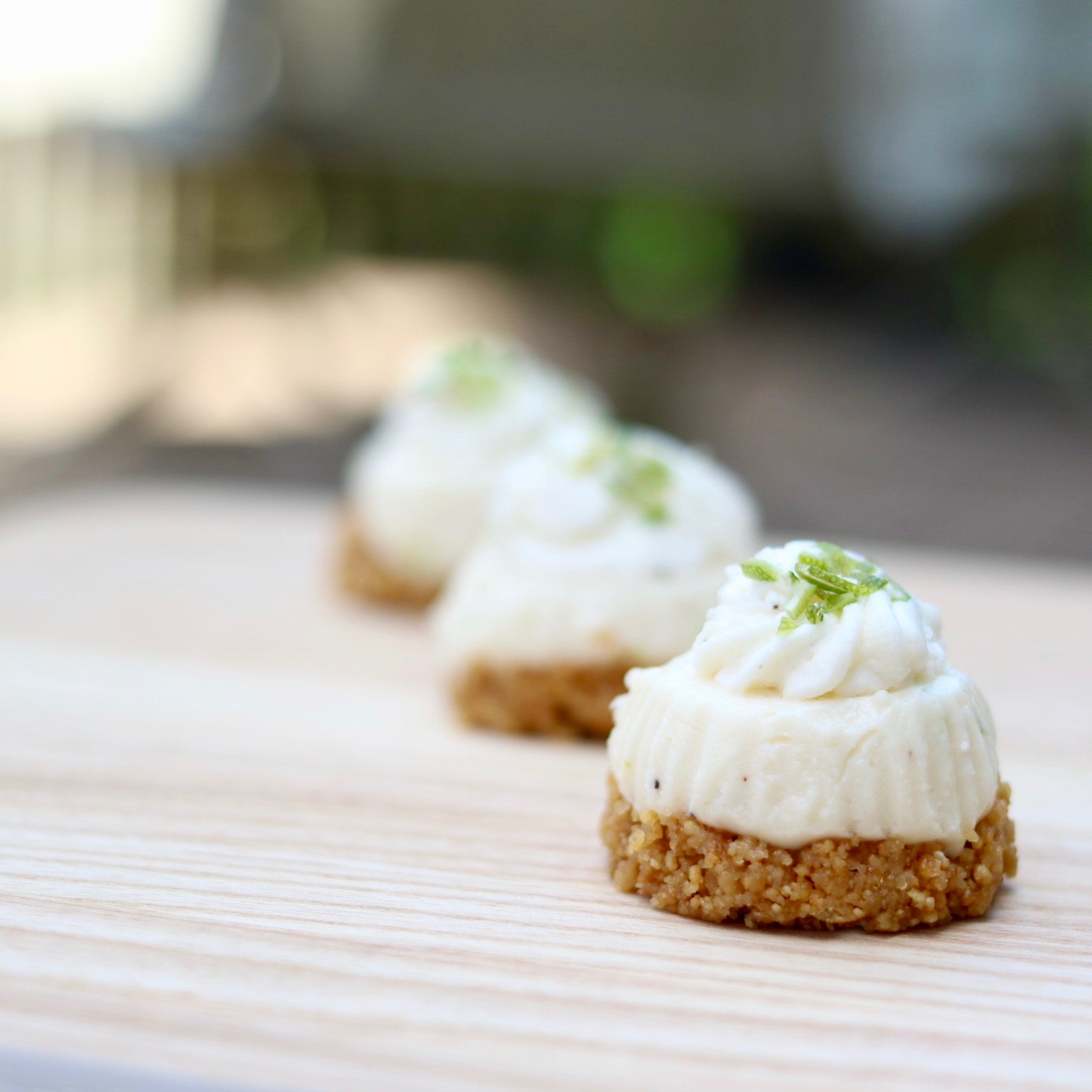 Melt butter and honey in a small saucepan over medium heat or in a microwave-safe bowl. Place cracker crumbs into a small bowl and drizzle in butter-honey mixture over top graham cracker crumbs stir in until well combined; set aside.

Using an electric mixer on high speed, beat cream cheese in a large bowl until creamy, about 3 minutes. Add condensed milk and beat until smooth. Add lime juice and lemon juice and beat to combine. Beat in 2 Tbsp. lime zest.

Using a whisk or electric mixer on medium-high speed, whip cream in another medium bowl to very soft peaks. Sprinkle powdered sugar over cream and Whip It® and continue to whip until it holds stiff peaks. Gently fold ½ of the whipped cream into the lime mixture; cover remaining cream and chill.

Line mini muffin pans with paper liners. Pour key lime mixture into a pastry bag or plastic bag with the corner snipped off and pipe batter evenly into tins. Top each with approx. 1 ½ Tbsp. cracker crumb mixture, breaking up crumbs to completely cover, then press down gently to adhere. Cover with plastic wrap and freeze until set, at least 3 hours.

Remove pies from molds, turn upside down, and remove paper liners. Spread or pipe reserved cream over pies and sprinkle the tops with evenly with the remaining key lime zest.

Please note that the desserts in this form thaw very quickly.

So for a recent “Nuit Blanche” outdoor dinner party, I made the dessert in the mini plastic wine glasses picture below. I layered the ingredients in the wine glasses and froze. In the glasses, the dessert did not thaw as quickly and was very elegant to pass around at the party. It was a HUGE hit and I would definitely make again. 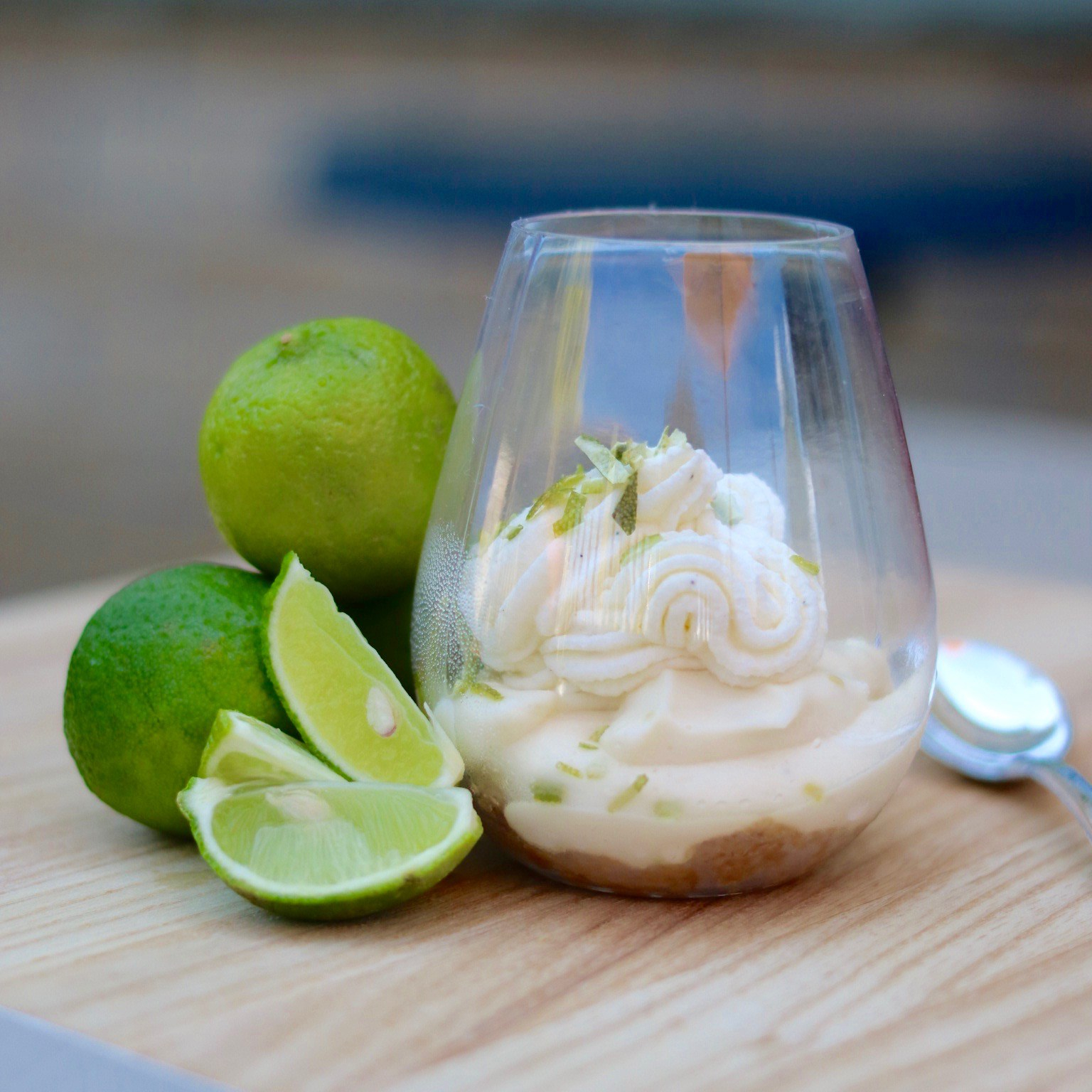 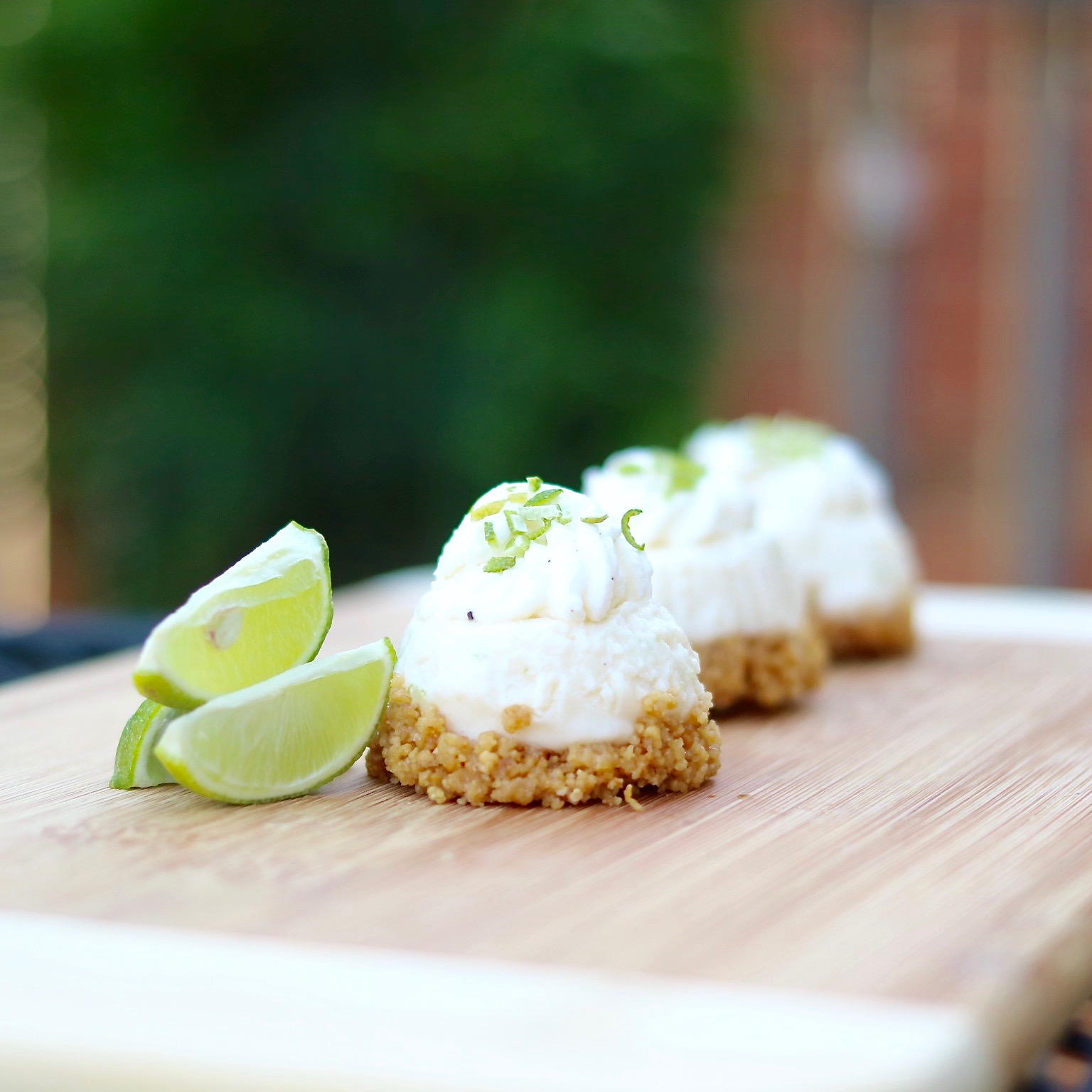 Tip: Do Ahead the Mini Cheesecakes (without topping) can be made 2 weeks ahead; cover and freeze.

Thanks to my friend and fabulous photographer @lanakanis for always being there with tips and tricks for my pictures.

As I spent the weekend browsing through the food blogs and Instagram accounts that I follow, I came across the mention of Jamie Oliver’s infamous recipe for “Chicken in Milk” as the best chicken dish they had ever tasted.

When you look at the components of the recipe it is quite a peculiar combination. Lemons, cinnamon, sage and milk.

OK Lets do this….

Chicken in Milk served with mashed potatoes and sautéed spinach

Preheat the oven to 375 degrees F, and find a snug-fitting covered pot for the chicken. (I used my Oval French Oven | Le Creuset Canada )

Season the chicken very generously all over with salt and pepper, and fry it in the butter/olive oil, turning it to get an even colour all over, until golden.

The tasty goodness at the bottom of the pan can be used to lightly saute the onions.

Add the remaining ingredients and place your chicken back in the pot, and cook covered in the preheated oven for 1 hour. 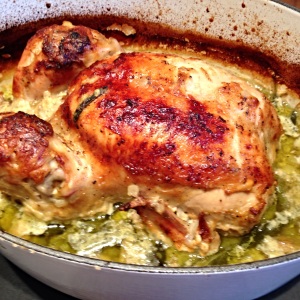 Baste with the cooking juice when you remember. Cook under covered for the last 40 minutes of cooking.

The lemon zest will sort of split the milk, leaving little curds bathed in chicken juices, and not homogenized; this appearance is less appealing. Remove the cinnamon sticks, and used an immersion hand blender to make sauce infused with lemon and balanced with an aromatic flavour from the cinnamon and sage.

To serve, pull the meat off the bones and divide it on to your plates. Spoon over plenty of the lemony sauce over the chicken.

Serve with wilted spinach and some mashed potatoes. And a crusty baguette would be great to sop up the delicious sauce.

Tip: Make sure that you season the chicken very generously. Any extra time that you take to brown the chicken on ALL sides will embark more flavour in the end product. Try to achieve a deep golden colour on the skin.

The next time I make this I will also add the juice of 1 lemon for an added kick. 😉

Risotto is a dish that is easy to prepare and it really is about developing the technique.  The rice is cooked briefly in a soffritto of onion and olive oil this is to coat each grain in fat. I added finely chopped fennel or finocchio , garlic and shallots to my soffritto.  Once the onions are translucent and the rice is toasted add a cup or more of white wine to be absorbed by the rice.  You can turned the heat up to a medium high heat and gradually add a couple ladles of very hot stock. I used a low sodium vegetable stock. The process of making risotto is to gradually add the stock in small amounts while stirring gently, almost constantly. This develops the starch and creates that smooth creamy textured liquid. I account that the completed risotto should be 18-20 minutes.  So in the remaining minutes, I added the roasted butternut squash then it is finished with a finely grated cheese either Parmesan or a Pecorino Romano. I prefer the Romano. Some cooks will add small pats of cubed butter but I feel that if you have cooked the risotto properly you will not need this to create creamy texture. Make sure adjust the flavour with salt and pepper.  The risotto will be rich and creamy but still with some resistance or bite: al dente, and with separate grains.  I garnished my finished Butternut Squash Risotto with saute cremini mushrooms, toasted pinenuts and finely chopped sage. 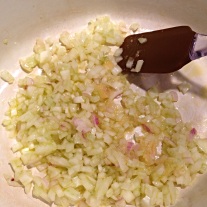 Soffritto of onions and garlic in olive oil

Translucent onions and garlic then toast the rice

Adding in white wine for flavour 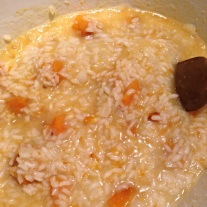 Adding in the Butternut Squash

Finished Risotto with addition of Romano cheese and sage

season with salt and white pepper