Since I’m participating in a 6 week Transformation Challenge, my diet has been limited to a certain amount of calories and some of my favourite foods are not allowed to be eaten. 😦

Some nights for dinner I’m making two separate meals. One for Geoff and I and another for the kids.

Last night ‘Dinner Tonight’ was no exception. The kids enjoyed a Spaghettini with their favourite Egg Yolk and Parmesan Cheese sauce. And Geoff and I had a Zucchini ‘Pasta’ with Shrimp, Pancetta in a Goat Cheese Lemon Shrimp Broth. The lemony broth high acidity was a great compliment to the fatty taste from the pancetta.

The pictures from the “Dinner Tonight” on @the5oclockrush Instagram and Facebook feed received a lot of compliments and requests for the recipe.

Place shrimp shells in a shallow pan with bay leaves and peppercorns cover with water until it is approx. 1 inch above the shells. Simmer on low for 10 minutes. Keep an eye on the pan. The broth should have a pinkish hue and slightly shrimp flavour. Using a fine mesh strainer, strain the liquid into a saucepan. Press out as much liquid as possible. Throw out the used shells.

Add the lemon juice to shrimp broth and add the goat cheese and whisk until smooth. Keep warm on very low heat. FYI The sauce may curdle from the lemon juice and if overheated.

In a large non-stick frying pan with a lid, place the fresh baby spinach. Cover. Turn the heat on high and steamed. The spinach will take very little time approx. 3-4 minutes and will reduce by half from the cooking process. Drain and squeeze the excess water from the spinach finely chop and measure, and set aside a ½ cup.

In the same large non-stick frying pan, cook the Italian pancetta on medium-high until crispy; then add the chopped celery and leeks. Cook for 3-5 minutes until celery has coloured but still crispy. Add black pepper. Remove the pancetta and celery from the pan; set aside.

Crispy Pancetta with Celery and Leeks

Toss the shrimp with kosher salt. Using the same pan and the fat from the pancetta, cook the thawed, peeled shrimp on high heat. Toss the shrimp in the pan and keeping the shrimp moving. Only cook until the shrimp is pink. Overcooked shrimp will become a chewy rubbery texture. Remove from pan and set aside with pancetta.

Wipe down the pan with a damp paper towel. Add coconut oil to same pan and cook the spiralized zucchini. Cook on medium high heat; continually tossing for 3-5 minutes. Keep the zucchini crisp not a soggy texture. Add in the cooked finely chopped spinach to incorporate and warm through. Then add whole grape tomatoes to warm. A couple quick tosses in the pan. 😉

Zucchini “Pasta” made with Spiralizer

Serve the zucchini ‘pasta’ in a bowl with the shrimp broth and top with shrimp, pancetta, celery and leek mixture.

**Tip: When using shellfish, such as lobsters and shrimp in other seafood dishes; reserve shells and place in a freezer bag to use at a later date for an intense flavourful broth. Or a fantastic fish soup.

What is a Spiralizer?

Spiralizing is turning vegetables and fruits into noodles. The spiralizer allows you to transform a healthy, low-calorie, low-carb vegetable into a giant bowl of pasta! It means that within minutes a great dinner is complete with a sauce and protein that won’t break the diet bank.

I purchased my Spiralizer for approx. $14 at Zehrs. It comes with 3 blades. 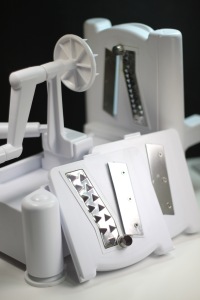